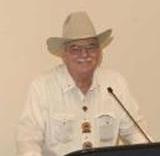 Cowboy Lodge was “born” during the 1990 World Championship BBQ when a friend and brother and myself were talking about how some of us on the Corral Club were Masons, and had been split up and were now working in different clubs.  We decided since we hadn’t been able to get together and visit anymore we should make an effort to do so.  There were only seven of us that we knew of and how difficult could that be.  So as we saw each of the other five, we decided to meet in the Arena Club before it opened on the following weekend.

When I arrived that next Sunday, there was a small group of men outside the club waiting to know location of the lodge meeting.  Masons being what they are and wanting to be part of the get together.  We saw no reason why they couldn’t.  So we invited them in and as it turned out we had 43 brothers show up for our first get together.  As we were visiting, it was brought up that we should do this on an annual basis and each of us should ask men on their respective committees who were Masons if they would like to come the next year.

As we were leaving to go back to work, someone said in passing “See you next year at Cowboy Lodge.”

Year by year our attendance increased in number and at our meeting in 1998 we had 175 brothers in attendance.  As of that meeting, we had about 300 committeemen of the Houston Livestock Show who are members of Cowboy Lodge.  We have now raised about 25 new Master Masons, or well as near as we can count, into Masonry, and just as a footnote, starting in 1995 with Most Worshipful Farris Binham, Grand Master of Masons in Texas, we have had all the sitting Grand Masters and numerous Grand Lodge Officers in attendance.  At our 1997 meeting it was decided we should do something for the Houston Livestock Show and Rodeo charities.  We collected enough money to purchase and donate a Calf Scramble Calf for some deserving young boy or girl would be participating in the 1998 show.

The donations have continued, see our Our Charity page.

Do you really want to delete card?

This process cannot be undone.

Card has been deleted successfully.